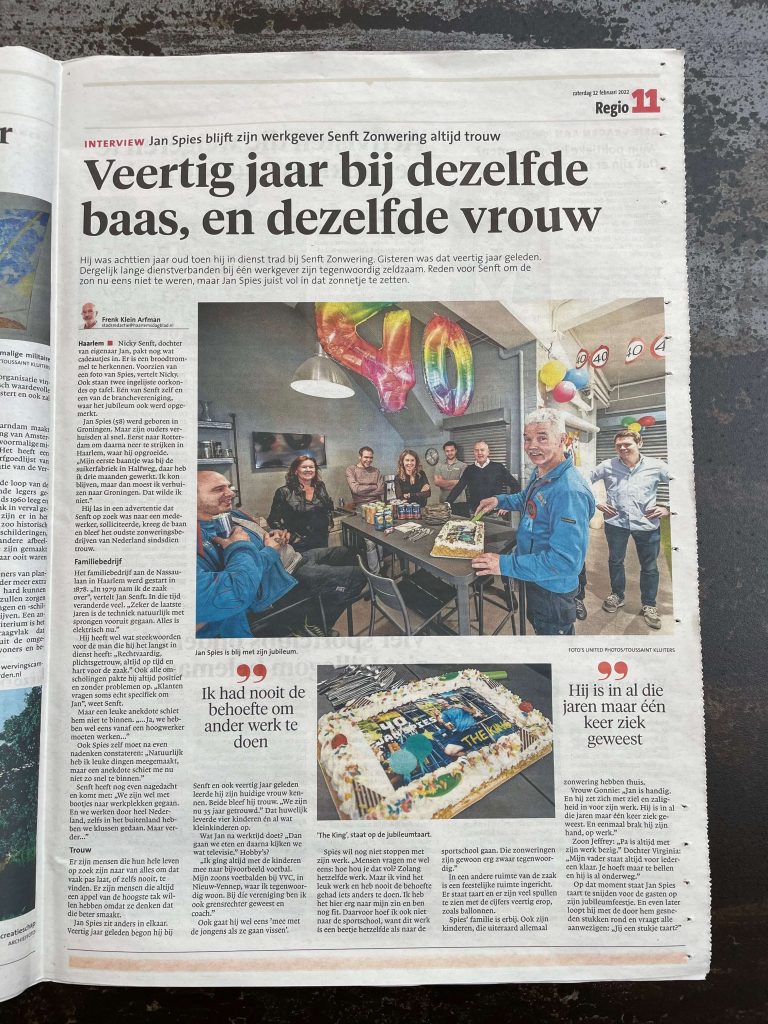 He was eighteen years old when he started working for Senft Zonwering. That was 40 years ago yesterday. Such long tenures with one employer are rare these days. Reason for Senft not to keep the sun out for once, but to put Jan Spies fully in that sun.

Nicky Senft, daughter of owner Jan, wraps some presents. A bread bin can be recognized. Provided with a photo of Spies, says Nicky. There are also two framed certificates on the table. One from Senft itself and one from the trade association, where the anniversary was also noted.

Jan Spies (58) was born in Groningen. But his parents soon moved. First to Rotterdam and then settled in Haarlem, where he grew up. “My first job was at the sugar factory in Halfweg, where I worked for three months. I could stay, but then I had to move to Groningen. I didn't want that.” He read in an advertisement that Senft was looking for an employee, applied, got the job and has remained loyal to the oldest sun protection companies in the Netherlands ever since.

The family business on the Nassaulaan in Haarlem was started in 1878. "In 1979 I took over the business," says Jan Senft. A lot changed in that time. “Of course, technology has progressed by leaps and bounds in recent years. Everything is electric now.”

He does have some catchphrases for the man he has employed the longest: “Just, dutiful, always on time and passionate about the cause.” He also always handled all retraining positively and without any problems. “Customers sometimes really specifically ask for Jan,” says Senft.

But a funny anecdote doesn't come to mind. “…Yes, we have had to work from a cherry picker…”

Spies himself also has to conclude after a while: "Of course I have experienced nice things, but an anecdote does not come to me so quickly." Senft has thought for a while and comes up with: „We did go to workplaces by boats. And we work throughout the Netherlands, we have even done odd jobs abroad. But further…”

There are people who spend their whole lives looking for everything only to find it late, or even never. There are people who always want an apple from the highest branch because they think it tastes better. Jan Spies is different. He started at Senft forty years ago and also got to know his current wife forty years ago. He remained faithful to both. "We've been married for 35 years now." That marriage produced four children and several grandchildren.

What does Jan do after work? "Then we'll have dinner and then we'll watch some television." Hobbies? “I always went with the kids to football, for example. My sons played football at VVC, in Nieuw Vennep, where I now live. I was also a linesman and coach at that association.” He also sometimes 'goes with the boys when they go fishing'.

Spies does not want to stop his work yet. “People sometimes ask me: how do you keep it up? As long as the same work. But I like work and have never felt the need to do anything else. I'm really enjoying myself here and I'm still fit. I don't have to go to the gym for that either, because this work is a bit like going to the gym. Those blinds are just very heavy these days.”

A festive room has been set up in another room of the business. There is cake and a lot of stuff with the numbers forty on it, such as balloons. Spies' family is there. Children, who of course all have sun protection, are also at home. Mrs. Gonnie: „Jan is handy. And he dedicates himself wholeheartedly to his work. He has only been ill once in all those years. And once he broke his hand, at work.” Son Jeffrey: “Dad is always busy with his work.” Daughter Virginia: “My father is always there for everyone. You just have to call and he is already on his way.” At that moment, Jan Spies is cutting cake for the guests at his anniversary party. And a little later he walks around with the pieces he has cut and asks everyone present: “Would you like a piece of cake?”

Senft Zonwering, the specialist in Haarlem, Amsterdam and the surrounding area for generations. Since 1878, this family business has been known for its service, quality and sustainability. It is not without reason that we were recently named the second best company in the Netherlands in our industry. We also have a dream for the future, but we prefer to realize yours. 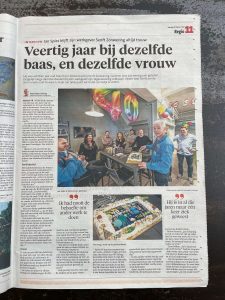 Closed for the holidays: